Ok, you know what, I'm not going to embarrass the people who have confused CERN's logo for the mark of the beast, specially since I'm nervous about this experiment myself. My time is particles, not planning the Earths destruction so I can shout at GOD "I won!" Below you will find out CERN's logos true origin, and the logo that didn't make the cut that would have really got everyone up in arms, which would have been understandable today. 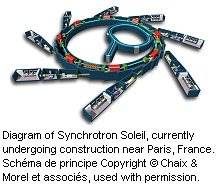 CERN's logo is taken from the design of synchrotron particle accelerators. Originally the design was going to resemble the outline of a schematic of a synchrotron, but the problem with that, CERN's logo would have looked like a black hole. Not good. So what we did with this logo design was remove a couple lines, shorten and angle a line in the opposite direction, off center it all, then add another circle with a line sticking up to help break up the original design. And that's how CERN's logo came to be.

(Thanks to CERN insider for article)

NOTE: Synchrotron image above is not the machine CERN's logo is based on, but a similar design. CERN insider asked me to update the first sentence of this article to state how he feels about the LHC experiment.
C.W. at 1:56 PM